Read about Wendy's adventures across the world 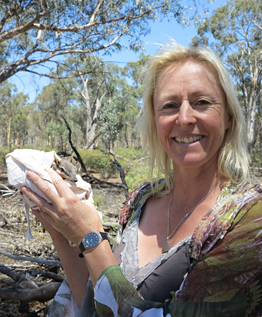 I asked if I could come out for a couple of days to help Rob, who is a Department of Environment and Conservation wildlife officer working in Dryandra, WA. His job is to monitor numbats and woylies, many of which have radio collars. Rob doesn’t need to sight the numbats when he tracks them, just note their location and hiding log of choice, so I didn’t expect to see a numbat. But a juvenile numbat named Pelican needed her collar changed to an adult sized one, so we set off to find her. After tracking her to the same log twice in a row, Rob was convinced she had been swallowed by a python, who was sleeping it off in the log. In such a case the collar is usually retrieved in a couple of weeks, unharmed after going through a snake’s digestive tract, but minus the numbat. We tracked the supposed snake the next day to another log, and when I shone a light in, I said to Rob, unless you have hairy snakes here, we have a perfectly alive numbat! He was very excited, as I was, and Bec, who was a young DEC officer who had come to get experience in radio tracking and collars. I had the longest arm, so managed to pull her out very carefully. She was beautiful! We took her back to the office and there Rob talked Bec through the weighing, measuring etc procedure, and the collar changing. Getting just the right fit was extremely important. And contrary to some people’s belief, the collars are NEVER left on after the battery has died. They are always retrieved well before the battery’s life expectancy. The radio tracking is very important in establishing what is the main cause of the diminishing numbers of numbats. They do not affect the numbat’s normal day-to-day life at all.

Anyway, after a couple of days tagging along, with eyes peeled for new numbats, I was exhausted, but happy. I had lots of great photos of Pelican, plus spent time in the bush learning new things from someone refreshingly passionate about what they do. Thanks Rob!

Feel free to reach out and enquire about anything!